The streaming services market has witnessed mushroom growth over the last few years. This industry is expected to become worth $125 billion in the next five years. With almost a billion minutes watched in the previous year, streaming makes up a significant chunk of all internet bandwidth consumed around the world. Netflix, the world’s most extensive streaming platform with more than 150 million subscribers worldwide, made up 15% of all internet traffic in 2019.

Using a VPN is essential for a variety of reasons. First and foremost is the fact that geographic restrictions and licensing problems mean that streaming services restrict content based on the region, which can be a considerable inconvenience sometimes. Then there are also the problems of ISP tracking and throttling based on bandwidth consumed. Together, these factors make it imperative to use a VPN when streaming.

Then, there is the question of which VPN is best in this case? Here we talk about Ivacy and its features that provide a fantastic and secure environment for streaming.

VPNs, especially free ones, have a lot of limitations concerning things like bandwidth and speed. They also offer limited options in terms of servers etc. With Ivacy, there are none of these problems. Bandwidth limitations mean that content begins to buffer midway, and that breaks the flow. Having Ivacy frees users from any of these issues. You can sit back and enjoy your favorite show Europe, but without interruptions.

Another fantastic feature that Ivacy offers is ‘Smart Purpose Selection.’ Before connecting, the service asks why you want to use it every time. Users can pick from a variety of choices, and streaming is one of them. When you tell the VPN what you want to do, the servers will be optimized for that particular purpose. Ivacy can also automatically switch between servers during downloads to provide the best possible speeds at all times.

Servers spread across the globe

Ivacy has one of the most significant distributions of servers in the industry. It has more than 1000 servers in 100+ locations. There are 55 countries in total where Ivacy’s servers are located, and those are spread across the world. They are not saturated in North America or Europe but in different countries. It enables users to access all types of content from anywhere in the world. That means you can get around geographic restrictions quite quickly.

Internet Service Providers have a lot of power in regulating the internet. Not only do they keep a log of internet traffic that emerges from user computers to which they provide a connection. This information contains everything from websites that users are visiting and the information which they are entering. Several ISPs practice throttling, where they deliberately slow down some user connections when they witness too much bandwidth consumed. Therefore Ivacy helps users bypass this problem.

One massive complaint with VPNs is that they hinder the speed of the internet connection. That can happen for various reasons, some of which are the VPNs fault. Free services are especially wrong with this because of faulty servers and low-quality frameworks. Ivacy thankfully doesn’t suffer from any of this because of the state of the art protocols it offers.

Ivacy won the prestigious BestVPN.com’s 2019 award for the ‘Best Speed.’ This accolade is given based on overall speeds and the consistency of these in different cases. Other independent reviewers have also tested Ivacy speeds and achieved satisfying results. The best thing is that the rate remains stable, even switching between different servers.

Streaming requires a high volume of data transfer. Wi-Fi is the preferred type of internet connection for this activity. The thing is, people prefer to use public Wi-Fi whenever they get the chance of not realizing these are hubs for all kinds of malware and hacking attempts. A public Wi-Fi may be a free and easy source for streaming, but it’s not the safest.

With Ivacy though, several protocols make sure users remain safe while using public Wi-Fi for any reason. The barrier of cybersecurity that Ivacy deploys hinders everyone, including service providers, administrators, and any malicious elements from spying on you. It means that you can watch your favorite content with ease and peace of mind at the same time.

While streaming with a VPN, it is easy to lose track of several things. It includes the battery percentage, status of the internet connection, and, most importantly, whether the VPN is connected or not. It can be dangerous because, without VPN, users are open to all kinds of threats from different parties.

Ivacy offers a great feature to minimize any chances of leaving a loophole with the Internet Kill Switch. The way this featureour favorite TV shows and movies works is that it completely severs the internet in case the VPN stops working. It means users are alerted in case the VPN isn’t working in the background as the internet itself will not function either.

Support for all devices

Streaming has become such a favourite past time that we want to have access to streaming services at any time and from anywhere. This is why the streaming service must be available for every platform open. However, if you are a VPN user, then you would want the same for the service too. With Ivacy, this is possible. 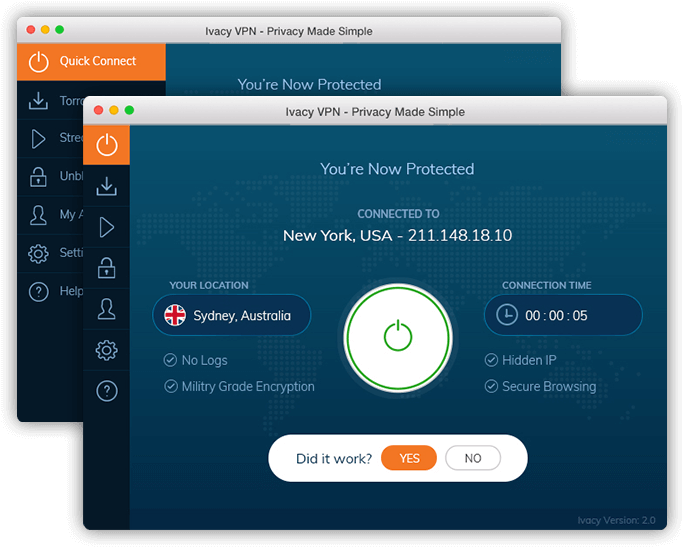 The rise of streaming services has been unprecedented, but then, so has the growth of cybercrime. This, coupled with increasing geographic restrictions on content, has made it difficult to freely view our favourite TV shows and movies without using a VPN. Privacy is an excellent all-round VPN for the job and one that has received a lot of praise in a short period.