Announced on December 28th at the Xiaomi Mi 11 conference, the long-awaited flagship router product finally arrived as scheduled. This is the Xiaomi Mi AIoT AX6000. It is almost the same in appearance design as the previous generation, but although it has the same ID design, you can feel the enormous progress of this generation “from 3600 to 6000” in terms of numbers.

The Xiaomi Mi AIoT AX6000 runs MiWiFi ROM based on a popular open-source OpenWRT framework, powered by a snappy dual-core Qualcomm IPQ5018 processor and a 1.0GHz Network Processor Unit (NPU). It comes with 512 MB RAM and 256 MB of internal storage.

According to Xiaomi, it’s capable of supporting 248 devices simultaneously. Most none power users will mainly benefit from improved bandwidth, but Xiaomi enthusiastic fans already using Xiaomi home appliances will find this router very useful to control and manage all of their devices under the same user-friendly Ecosystem platform.

You will find four network ports on the back of the Xiaomi Mi AIoT AX6000. The router is equipped with one 2.5GbE WAN/LAN adaptive network port, along with three LAN ports surpassing the standard Gigabit Ethernet ports found in traditional routers.

Xiaomi added a new 2.5GbE Ethernet port to better serve users’ needs for feature broadband upgrades in the years ahead. Another change compared to the previous Xiaomi Mi AIoT AX3600 model is the all-in-one reset and mesh button that was also added, and the new labeling of the ports is greatly improved and more clear to understand from a user standpoint.

According to the official product specifications, the Xiaomi Mi AIoT AX6000 router comes with one 2500M WAN Ethernet port, while the remaining 3 LAN ports are 1Gb type, which raises some questions about this poor selection of Ethernet ports.

If only the input WAN port can reach 2.5Gb at best, then the throughput of other devices connected to the other 1Gb ports will be able to get a maximum throughput of 1Gb. The point is that having a high through WAN port will not help you achieve actual transfer speeds closer to 2Gb or above.

Under Xiaomi AX6000 Settings, you will find a WAN port option for toggling between 1Gb/ 2.5Gb and also specify the preferred port rate.

The router is made of ABS material, with a strong sense of plasticity and poor touch. From the side, the router body is triangular. If you think about it carefully, the different generations of Xiaomi routers are entirely different in design, and there is no continuity you are wrong. It’s not as compact as the AX1800 with the tower-shaped style design. Some users would find it problematic placing the device in crowded places such as a shelf or on a table, but the high-level specs justify the device size.

Xiaomi states that the router can supply up to 574 Mbps speeds on the 2.4 GHz frequency and up to 4804 Mbps on 5 GHz. The Xiaomi router AX6000 supports Wi-Fi 6 enhanced technologies and 4×4 160MHz high-frequency bandwidth, which is doubled again compared to the current mainstream Wi-Fi 6 4×4 80MHz bandwidth.

It is also the world’s first to support the most advanced 4K QAM high-speed transmission technology to date, further compressing the data density, allowing the amount of data transmitted at the same time to increase by 20% compared to the previous generation of 1024 QAM.

The AX6000 router can be used to connect and manage all of Xiaomi’s intelligent products through ‘Mi Home’ (a mobile app that can automatically detect Xiaomi IoT devices, enabling users to configure and operate them with one click of a button.

You can also use Xiaomi’s second app, named ‘Mi Wi-Fi’, which gives you complete control over the router operation. Options include automatic disconnecting from a local network, firewall settings, real-time connection optimization, applying QoS restrictions/limitations on specific devices, and much more.

Once connected, the router identifies an active internet connection you are automatically redirected to Xiaomi’s leading gateway portal. There you need to set your WiFi SSD names and passwords. Depending on your specific needs, You can combine both bands under a single SSD or configure them separately.

This Xiaomi Mi AIoT AX6000 router edition is designed for the Chinese market. To use the Web-access option, you must right-click on the browser and use the Google Translate feature built-in in popular browsers such as Chrome.

The AX3600 already has an official ROM in English that can also be applied to routers in the Chinese edition, so we expect this to be the case for this product. Sooner or later, a manual upgrade will become available also for the Xiaomi Mi AIoT AX6000; until then, you can use the Xiaomi ‘Mi Wi-Fi’ mobile application that offers a wide choice of 55 languages.

Focusing on externals. The appearance of the Xiaomi Mi AIoT AX6000 is almost exactly like the previous Xiaomi Mi AIoT AX3600 model, with a few minor changes. Xiaomi added a mesh/reset button, and the hardware under the hood is entirely different.

Xiaomi decided to cut some costs with a slightly lower level CPU implementing the Quad-core Qualcomm IPQ5018 Chip based on the Cortex A7 ARM architecture in favor of a high-speed throughput of 2.5 Gb Ethernet LAN port and also a lower price tag. That said, The hardware specifications are still impressive and should be more than enough to connect and work with multiply devices at home or work. You can find other changes in the specification in the comparison specs & features table listed under ‘Xiaomi AIoT Router AX3600 Mi AIoT vs. Xiaomi Mi AIoT AX6000‘.

The new Xiaomi Mi AIoT AX6000 router shell/housing is the same as the previous AX3600 mode. It is relatively large in dimensions, with an elongated horizontal type design, measuring approximately 400 mm in length. Placing the unit on a small table might be somewhere challenging, But considering the fact it comes with seven antennas, it’s impressive and very reasonable for the value you are getting as a customer. Xiaomi Could have done a better job by designing a simple wall mounting unit that can carry the router, but overall the general design is impressive.

The status operation status lights functionality remains the same as in the previous Xiaomi Mi AIoT AX3600 model. You have two indicator lights: Internet and system. If one of them turns orange, you face a technical problem with the unit. The default normal state is when both LEDs light up in blue-violet (illustrated in the photo below).

Instead of doing the usual bandwidth testing through the Ookla Speedtest website, we placed our Xiaomi POCO X3 phone in three strategic locations in a 100 square meters apartment and checked two significant parameters: available bandwidth and signal strength.

The three router units were placed in the exact location and tested using the ‘Wi-Fi Signal Strength Meter’ Android app. We connected the router units via Cat 6 Ethernet cables, and all testing took place in rooms with open doors!

Testing signal strength in location no` 3

According to Xiaomi prompt notification. For first-time setup, the preferred range for setting a mesh unit is no more than 3 meters. After the pairing is completed, you can place the mesh units across your apartment where you have weaker reception. The benefit of using Xiaomi brand routers is that each device can operate independently as a router or mesh unit.

To get optimum performance from your mesh system, you must ensure that you have some open space without closed doors so the signal will not be blocked with minimum interference. That said, the router devices that we highly recommend are AX3/AX5/AX6 models and especially the AX1800 model as our primary recommendation.

The pairing with a mesh unit usually takes about 1-2 minutes. In our case, the AX1800 router is connected to the Xiaomi Mi AIoT AX6000 router. After the linkage is complete, you can select the location of the mesh unit from a list.

A message notifying that the pairing process between the Xiaomi Mi AIoT AX6000 and the AX1800 used as a mesh unit is successful.

After the paring with the AX1800 unit is successful, you can see a detailed list of all terminal devices connected to the central Xiaomi Mi AIoT AX6000 router unit, including the Mesh terminal unit IP and MAC address.

Based on our test, you can still improve performance if you place the mesh end unit at more considerable distances beyond 10 meters from the central router unit; in this case, the Xiaomi Mi AIoT AX6000 router broadcasts the signal.

We recommend using the Xiaomi AX1800 model because of its economical design in a tower shape that you can easily place even on a small shelf. You can use 1 or 4 units to cover your whole apartment. Again, it depends on how big your apartment area is, but you get the point. The more end units you spread, the better coverage you will probably get.

The Xiaomi Mi AIoT AX6000 router is an excellent product packed with impressive features every gamer/family member would love to use. Especially for Hefty users that consume a large amount of multimedia content and are looking for a good router capable of providing a robust, stable WiFi connection for video and audio streaming applications.

Focusing on the low price tag, you will likely not find any better router in this category and a price range packed with six amplifiers and seven external WiFi antennas, including an extensive bandwidth range.

Price & Where to Buy

The new Xiaomi Mi AIoT AX6000 router is available on Banggood official store for $190.49, and we think it’s a fantastic product worth considering buying!

$190.49
This site contains affiliate links to products. We may receive a commission for purchases made through these links.
Buy this item
androidpimp 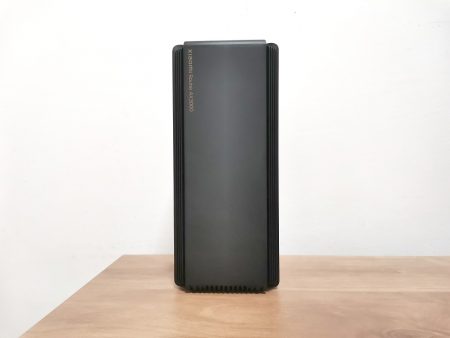